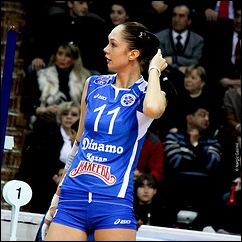 Ekaterina Gamova will not play anymore for the Russian national team. She announced it before the Olympic games and, in consequence, her last performance was against Brazil  in the 2-3 quarter final game defeat. After the last point in a dramatic tie-break, Gamova covered her face with the hands and cried.

The last game was in the quarter finals round of 2012 Olympic Games. Russia, her team, lost against Brazil and the gold medal dream died. ¿Do you remember that game?

It was a magnificent play. One of those plays that you can watch once, twice and it never gets old. Amazing, tense, with a lot of stars on the court, and they played high level volleyball and, at the same time, made mistakes like kids. An inescapable symptom of playing under pression. .
Oh please!!! Brazil vs. Russia. It was the biggest injustice of the schedule. Those team deserved to be among the medalists in London 2012 but it happened and the Russians came back home defeated .

Sincerely, Brazil deserved the victory, but Russia had chances for winning too. Teams like those win and lost each other. Brazil smiled  this time and, like everybody had thought, it was the Olympic champion. It was a “voiced secret”, the winner in those games, get the confidence and motivation for becoming the Olympic Champions and gold medalist.

In the critical moment the best weapon of Russia did not appear; the blocks were completely absent and nobody stopped Sheilla. The girl of Belhorizonte was the leader. Actually, that game was the best for her in Olympic competitions. In the final match she helped the team but the final match was Jaque´s show (Jaqueline Carvalho).

Brazil smiled and Russia remained silent. Everybody kept quiet and the country cried because a giant said goodbye before planned. The images were clear, that generation, Russian historic generation doesn’t have another Olympic tournament to play.

It is an old generation, with the experience and  class of Ekaterina Gamova, Liubov Sokolova and six times Olympics, Evgenia Artamonova-Estes. Precisely, once these great three players say good bye to the national team. She is Ekaterina Gamova.

Gamova has been Russia´s leader since her Olympic debut in 2000 when they won the silver medal on Sydney. On that opportunity, Russia lost finals to Cuba. It was the first time I saw her. She salt to the court in a critical moment with a Block mission and she did not fail. her and Elena Godina stopped Yumilka Ruiz, but the actions was a mistake because another player of Russia touch the net and the point was for our team (Cuba). Anyway, the 20 years’ girl showed how big she could be and said “I´m here for a long time”.

She is a giant and also a great volleyball player.  With more than 2 meters, she attacks over 3.21m and 3.10m for block´s actions. Opposite, central and outside hitter, she is a lethal offensive weapon and has a nice service. She played 231 matches for the Russian team, 21 in Olympics. With Russia, she won the World Championship two times (2006 and 2010), was MVP on 2010 edition and was Olympic silver medalist in Sydney 2000 and Athens 2004.

Now, the Ekaterimburgo´s girl has said good bye to her team. She will continue with her club but she needs time to rest and study. Yes to study, she plans to go to Moscow ´s University to finish her university career for being Journalist.

With Gamova out and the probable retirement of Chachkova-Sokolova and the Artamonova-Estes, the Russian team walks to a hard renovation. The big problem is finding another attack leader. Looking into the roster of the last tournament, the best option could be Nataliya Goncharova (Obmochaeva), she is playing well and in the Olympics she showed courage.

But something is clear, for Russia and the world volleyball family, the good bye of “the big-girl” left an empty space because she is one of the best players of the world for the last ten years.

Bubka Competed in Cuba and Lost

Mariya Savinova: » … I’ m very fortunate to have won at Daegu»

Ismael López Mastrapa: “I Owe Cuba Everything I Know”